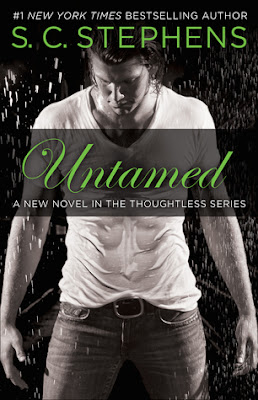 #1 New York Times bestselling author S.C. Stephens brings us the next book in her Thoughtless series!

The spotlight doesn't only shine. Sometimes it burns.


Being the bad-boy bassist for the world's hottest band has earned Griffin Hancock some perks: a big house, a fast car, and most importantly his incredible wife, Anna. The one thing it hasn't brought him is the spotlight. Anna tells him to be patient, that his talent will win out. But Griffin is through waiting for permission to shine.


Without warning, Griffin makes a shocking decision and takes the gamble of a lifetime. Suddenly he's caught up in a new level of lights, cameras, and chaos. One that pushes his relationship with Anna to its limits. Anna has always found his unpredictable behavior sexy, but lately he's seen an ache in her eyes--and it has his soul in knots. Just as the recognition Griffin seeks is finally within reach, the thing he loves most in life could be slipping through his fingers...

This book was amazing. I didn't know where S.C. was going to take Griffin's story because there is only so much you can do with a plot like the D-Bags, but she delivered and she delivered, HARD.

Stephens is pretty much known for her angst. Her Thoughtless series had me in a big old pile of angst and I never hated a character as much as I did Kiera, but I LOVED the series so much, I couldn't put it down. This continuation was no different.

I couldn't tell if I felt sorry for Griffin or if I wanted to murder his balls because he was being such a narcissistic shithead!!!

Being inside his head was almost painful, I wanted out; jump ship and into someone who had their shit together because he was a hot mess!

I was rooting for him and then I was praying he would crash and burn, I didn't know which one was more prevalent, but I did know something major was going to happen, it had to happen in order for change to be made.

The only way Griffin could really grow was to be stripped of everything he was and fight his way back, but at the same time, I loved his "give no shits" personality, I didn't want him to change too much. At one point while I was reading, I had to peek in the back because the stress was STRESSING me OUT! I couldn't take it and I wanted to see what was going to happen.

I was satisfied where this book ended, and even if I wanted to chop Griff's penis off and feed it to him because of how much of a douche he was being, I liked the life lessons that were taught in the storyline and the way the story unraveled was anxiety-ridden, but it made the ending so much sweeter.

There were a lot of surprises and the story did not evolve how I thought it would, which made it so much better!

This is seriously one of the BEST books I have read this year and you will not be disappointed in Griff's story! It is original and a lot of twists that will leave you in a big pile of goo or angst.

I give this a 5"I fucking hate to love Griffin" Stars!!