Just finished S.C. Stephen's series last night and after reading all three of them I got to say I am on the I <3 Kellan Kyle bandwagon!!

Here are the descriptions from Amazon: 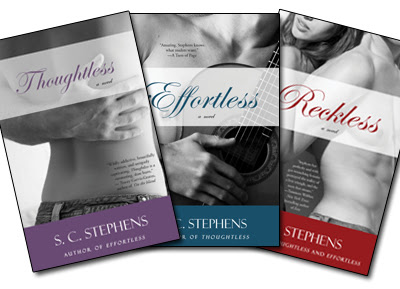 THOUGHTLESS:
For almost two years now, Kiera’s boyfriend, Denny, has been everything she’s ever wanted: loving, tender, and endlessly devoted to her. When they head off to a new city to start their lives together—Denny at his dream job and Kiera at a top-notch university—everything seems perfect. Then an unforeseen obligation forces the happy couple apart. Feeling lonely, confused, and in need of comfort, Kiera turns to an unexpected source—a local rock star named Kellan Kyle. At first, he’s purely a friend she can lean on, but as her loneliness grows, so does their relationship. And then one night everything changes . . . and none of them will ever be the same.

EFFORTLESS:
After being caught in the middle of a love triangle which led to a devastating betrayal, Kiera pledged to learn from the mistakes she’d made. She was determined to never again inflict that kind of pain on anyone, especially the soulful, talented man who held her heart. But life offers new challenges for every relationship, and when Kiera’s love is put to the ultimate test, will it survive? Love is easy . . . trust is hard.

RECKLESS:
Can love survive when life gets Reckless?
When the band hits it big, Kiera and Kellan must ask themselves: Can their love for each other withstand the constant pressures of superstardom? The friendships they’ve formed, the new family they’ve found, and the history they’ve forged will all play a part in helping them navigate the turbulent waters of the band’s exploding popularity. A greedy executive hell-bent on success, a declining pop star looking for an edge, and a media circus that twists lies into truths are just some of the obstacles the lovers will have to overcome if they are going to remain together. Fame comes with a price—but will it cost Kiera and Kellan everything?

I have to admit when I started this series Thoughtless made me want to laugh, cry, scream, and throw things because it frustrated me so much!! I had a hard time deciding if I was going to continue reading the rest of the books because that one made me angry but after I thought about it, I realized that if a book can make me feel like a bi-polar off her meds then I should  HAVE to finish the rest of the books!!

I did not like Kiera in the first book, I wanted to smack her a couple times throughout the story. She was whiney, annoying, timid, a cheater, prudish, wishy washy.. the list could go on. She could not make up her mind, which DROVE ME CRAZY. She wanted her boyfriend one-second and then wanted Kellan the same second. I kept screaming OMG PICK ONE ALREADY AND STOP BEING THAT GIRL!!! After I came out of my manic episode and finished the book I was ecstatic that she finally picked one. Effortless she still annoyed me because she became a jealous ninny and I wanted to scream every time her mind wandered off to the dark side and if she apologized to Denny one more time for cheating on him, I was going to kick her!! She was yet again wishy washy, prudish, annoying, timid, and whiney. But I saw potential in her, she was growing out of her jealous rages and the lying. She was actually coming out of her shell and I was rooting for her to grow from the mess she turned her life into in Thoughtless. I love that after everything that happened in the first book, her main friendships stayed intact. I absolutely LOVED her in Effortless. She grew as an amazing character who grew confident not only in her relationship, but in herself. She started to act like an adult and I cheered that her jealous fits were over, it made me smile when she could be around Kellan and his fans without wanting to punch a woman in her boob (of course there were the rare ones that I would have wanted to punch too).

There are rare books that I have read and have LOVED every single character, even the evil ones I would find amusing because a good villain is hard to portray sometimes! But by the time I was through with Effortless I was completely in love with every character in the book and that surprised me. Even the fans were pretty amusing in the books and I grew to love them as well.

The plots in the first two books were kind of annoying just because of the situations the characters were in, were annoying. But I REALLY LOVED Reckless' plot with the combination of Sienna and Nick being assholes and Kiera growing to be such a confident character it interested me and it was different. I wasn't expecting this kind of plot after the first two and I am so glad Stephens made the plot the way she did. I laughed, I got teary eyed, I got mad and I laughed some more. I am happy that Stephen's finally told us some of the crude things that Griffin would say or do because the first two books she would only write that Kiera hated the way Griffin acted, he was crude and did awful things for attention but she never told us what he said exactly and what he did that disgusted Kiera and that drove me crazy, I WANTED TO KNOW. When I finally got the insight on the crudeness I was laughing my ass off and fell in love with Griffin's character a little more.

S.C. Stephens I tip my hat to you. You made me fall in love with characters even when I was hating them, and that my friend is a rarity!

If you want to read these books get them HERE for your Kindle:

Posted by The Book Trollop at 5:20 PM