{Review} That One Night by Josie Wright 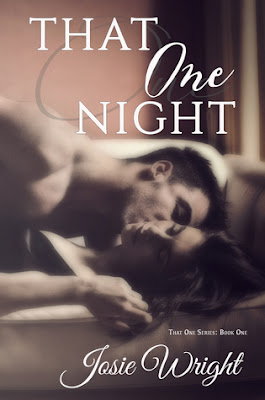 All it takes is just one moment to change the course of your life. For me, it was one perfect night.
I have always had a thing for my brother’s best friend, Ben. When I found him on my parents’ couch, drowning his sorrows in a whiskey bottle, my attempts to comfort him quickly turned into a night of raw and intense passion.
My foolish heart hoped he might feel the same way I do.
But Ben wasn’t there to stay and I woke up the next morning alone with a broken heart.
I attempted to forget the guy with a smile to die for and a touch that sets me on fire.
I thought I was over him.
I thought he was gone forever.
Until, eighteen months later Ben returns and learns my secret. Now, he is hell-bent on winning me back.
He plays dirty.
And he won’t stop until he gets what he wants—me.

Not suitable for under 18's due to strong language, violence and sexual content

I actually really enjoyed this debut novel by Josie Wright. It had a few issues but it was an overall good read, with a lot of personality that had you excited to turn the pages.

I really LOVED Frankie, she was sarcastic, funny, and had me chuckling more than a few times. She was determined, hard working, and had a huge heart that was shown throughout the book.

The story itself was all very emotional and a little dramatic at times but it was still entertaining. There were some scary twists towards the end that I didn't expect, it kind of came out of nowhere.

The sexy was also there, allllll over there, with its sexy style that didn't want to make me hurl. It was sweet, sexy, and had me a little squirmy in my seat... mmmmm...

The only real issue I had was the fact that the story had WAY too many details, making it WAY longer than it needed to be. I feel a third of it could have been cut and the story would have still run smoothly. The day to day stuff just wasn't necessary in some places, especially when there was a lot of talk of natural remedies and breastfeeding. I skipped a lot. Hell, I am a firm believer in amber necklaces and nursing too but I don't think it really needed to be added in this instance. I could be wrong though, some may like all the little details, I am just not one of those people. I got bored and started skimming.

But other than the verbiage, the story still flowed nicely, was sexy, and I got those little butterflies all over the place. I can't ask more from a story, and since this author is new to the scene, I have a feeling each book will just better and better...

Overall, I give this book a 4 "Ben is very, very good with his hands" Stars!!!

To be released next month!!

Posted by The Book Trollop at 5:18 AM