{Reviews} Behind the Blindfold Volumes 1 & 2 by Natalie E. Wrye 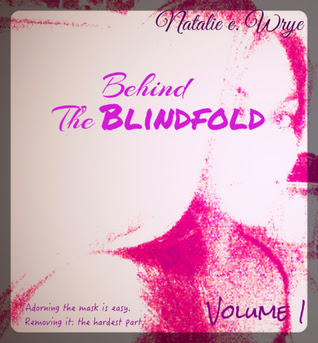 A flash of green eyes, and then…he was gone.

Mark Rich shows up in a gallery, and then at a party, and then in Saturday’s dreams.

But who is he? Ostensibly, he appears to be a jack-of-all-trades – a multifaceted Renaissance man.

Her artistic heart will follow him to the depths of his realm, to a world of beauty, art and desire in which she so desperately wants entry.

But Mark has a dark secret…deeper than any shadow Saturday has ever encountered.

Blinded by a craving she has never known, will she find the strength to remove the mask and look past her heart into a reality that may shatter her? Saturday Blake has uncovered one of Mark Rich's biggest secrets.Betrayed, frightened and hurt, she tries to move on, believing that the game is over, but she is sorely mistaken.There's another player in this game...and they won't play by any rules.And Mark's not done with her yet...

When I first started this mini series, I wasn't sure if I would like it. Sure, the sex was hot and the main character was ok but there seemed to be nothing too exciting happening that made me want to flip the pages faster...

Plus, the whole story was weird. Not weird in a bad way, I guess just different. But I was intrigued enough to continue so that is what I did.

It got better towards the end of the first volume, I was pretty pissed the author left it like she did and I had to go to bed before being able to read the next one!!!
But I continued on to the second volume the next morning and this one was a little more adventurous and kept me entertained from almost the very beginning.

And then the ending...

This author definitely gets MAJOR kudos for that plot twist because it was something I did not see coming in any direction...

Kind of hits you out of left field. There are a few plot twists that are not really easy to spot and it made the story a lot better.

The writing was a little sporadic, the attempt at suspense fell a little flat in both stories, it  needed to be spruced up a bit, dug a little deeper, and then maybe both stories would have really EXPLODED.

As it was, the way both stories unfolded was kind of bumpy but not really entertaining. It got a little slow and then a plot twist but nothing led up to the plot twist, it just kind of happened.

Even though the stories themselves were a little flat, I still enjoyed the overall premise and I think with more stories, the author will really thrive!

I give the fist Volume a 3"AHHHHH run for your life" Stars and
Volume 2, 4" PLOT TWISTs was given a new name" Stars!!!

Posted by The Book Trollop at 7:56 AM