SO this sweet sweet author asked me to review her book that is coming out in July and of course I said YES..
I just got done reading it and it took me a while to figure out what exactly I wanted to say about it. It was different from the regular books that I have read and I really enjoyed it...

Here is what I thought about 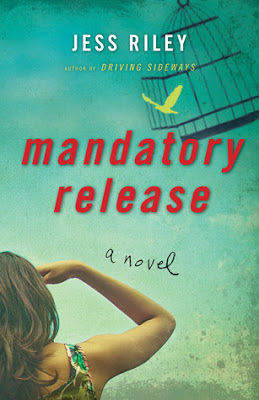 Description:
Recently paralyzed in a car accident, thirty-year-old Graham Finch spends his days trying to rehabilitate a caseload of unruly inmates and his nights on one bad date after another, attempting to rehabilitate his heart—
—until his high school crush Drew Daniels walks through the prison gates one hot summer morning. On the run from a painful past that’s nearly crushed her faith in love, Drew is a new teacher at Lakeside Correctional. Graham, smitten all over again, tries to redirect his unrequited feelings. But when your heart keeps looking back, it's not easy to turn it forward.
Amidst escalating violence at work, Drew is forced to confront her secrets, find a way to forgive old sins, and learn how to listen to her heart and her head when it comes to men. Graham must also learn to make peace with his own past. Together they realize that if you’re going to save yourself, sometimes the best way to do it is by saving someone else first. If only finding their way to one another was easier than working with convicted felons.
Loaded with twisted humor and pathos, MANDATORY RELEASE is a darkly comic, unexpectedly sexy love story about broken people putting themselves back together. People who learn that no matter what you lock up—a person, a secret, or your heart—sooner or later, everything must be released.

So I started reading this book and within the first couple pages of the book I was already enamored with the lead character, Graham.
He was cynical, funny, sarcastic, witty, and blunt. He is in a wheelchair from a car accident with a slim possibility of ever walking again.
When we are first introduced to him, he is meeting people on an online dating website but not revealing to them that he is in a wheelchair. He wanted to have the other people get to know him first before being put off by the fact that he was handicapped.
Of course he puts his own twisted humor in it, which makes the reader feel sorry for him but at the same time we are laughing with him and at his predicament.
Graham works at a men's prison and I was totally confused about this jail that they spoke of.
When I think of prison, I think of Oz, that crazy ass drama about shanking people and raping in showers. So when the author was talking about a school being at the prison, I was like WHAT does that really happen?? WOw I learn something new everyday.. Maybe I shouldn't be stereotyping... Then again my only frame of reference was the show Oz and Locked Up (which my husband has a weird fascination with).

This school is where we meet the other main character, Drew.
Drew is a teacher who came to the jail after leaving her other school job because of an outrageous scandal. You do no know the deets about the scandal until almost the end of the book and it frustrated me that the characters kept referencing the incident but nobody said WHAT it was.
Drew is heartbroken, witty, funny, just as cynical as Graham and trying to heal from what happened at her job, so of course she runs away to a prison..

"I wanted to escape, and what better place to do that than prison"

You see them both talk about the other in their internal monologues and realize that they both want to be with the other but for different reasons they do not pursue each other.
It's frustrating but it isn't what this book is really about, the romantic aspect of this book takes a backseat and you see something bigger developing.

These characters are probably my FAVORITE part of this book. They are truly well developed and no stone is left unturned. You get a full range spectrum of each character and you love them all. They are all funny, twisted, sarcastic, and witty. By the end of the book if you haven't laughed at least once then you don't have a sense of humor (or not a dark sense of humor like me? ;) )

I hinted that this book was about something bigger than a romance and it was. It was about healing and finding yourself after a tragedy.

Graham tried to find himself in the world where he didn't think anyone could/would accept and love him like he should be because of his handicap.

And Drew who is trying to get over her demons and find happiness again, without turning bitter.

The prison actually teaches her bigger lessons than she ever thought possible. I think my second favorite part of this book were the people that Drew helped. She really seemed interested in helping these young men and it was rewarding to read all the good she did. What made it even better was when I read at the end that there were real people out there who did this in the real world..

Talk about a life experience.

This author taught me about compassion and realizing that not every criminal is as heartless as people think, they are just desperate to fit into the world where they don't have the resources like others do. She taught me not to judge a book by its cover because the put together teacher who people look up too, may be just as sinister as a snake. And a criminal behind bars might actually be kind but lost in the world where nobody gave a damn about him.

The only thing that gave me pause, was the ending. I can't put my finger on what exactly was off but it rubbed me the wrong way. Maybe it was just too abrupt or seemed like the book was going one way and then the author did a 180. I liked what happened with the main characters but I think it was missing something, maybe more details. The book was listed as a love story but I didn't feel the love between the two characters, I thought they resembled friends more than lovers. But like I stated before, this book was about more than romance so it didn't deter me from liking the book, because I really did.
When it comes out I hope all of YOU love it as much as me.

I give this book a 4/5 and when it comes out on July 16th, I recommend buying it ASAP.

Posted by The Book Trollop at 7:01 AM